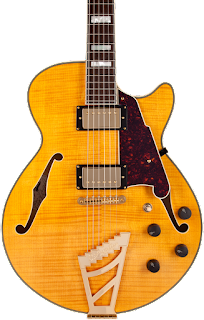 D'Angelico is a manufacturer of custom electric guitars.

This EX-SS model has a 15" single cutaway semi-hollow body with a laminated flamed maple top and back that is tied together with 5-ply binding dressed in a stairstep pickguard that flows into a 25" scale hard maple two piece neck with a walnut core that features a rosewood fingerboard and mother of pearl inlays that ends at a 1 11/16” nut.

Selector position 2: Neck & Bridge
A even balance between the neck and bridge with a boost in harmonic response - a very usable middle.

Selector position 3: Just Bridge
The semi-hollow body lead sound that we all look for but can never get. To me this was the guitars sweet spot.

Action, Fit & Finish:
The finish is a natural flamed maple, the action was low without any fret buzz and the intonation was dead on.

Reliability & Durability:
The guitar seems to be well made. There was no hum or crackles from the electronics and all knobs and hardware were installed snug and proper.

Impression:
My first impression was wow -- I am one of those lucky guys that lives a "stone's throw" away from the D'Angelico Guitar headquarters -- so I was the first guy to play their new line the day after they came in. Now that statement may have some of you scratching your frontal lobe holder since D'Angelico Guitars are traditional American made and would not be coming in from anywhere, but coming out from their backroom. One of the changes that the D'Angelico Guitar company has done to their brand since it's rebirth -- is not only stick with their traditional American made line of guitars that the average guy could never afford, but they are now producing a line of guitars that retails for just under $1,500 USD as well.

The way they can do this is by using a team of luthiers in Korea (notice how I didn't say production line). Most of us guitar players cringe at the thought of a guitar that hails from Korea because of what Guild, Gibson, Fender and a few others have done in the past. Here is my thought on this. I don't care where in the world a guitar comes from as long as I am not being lied to as a consumer. Hell, everyone that bought an "American  made" Gibson guitar from the late 1990's to early 2010 was buying a guitar from India -- and the only reason why I know this is because of the Lacy Act violation the Gibson Guitar company was slammed with. The good people at D'Angelico Guitars are making it very clear that these are NOT US made, but are made by some of the best luthiers that live in Korea so you and I can own a guitar that would normally be way out of our reach.

With all that said, again WOW. Adam (my sale guy) brought me out three to play. The guitars were still in their box and had not seen the light of day since they were packed up and shipped. I was a little concerned about playing one without a full inspection and possible setup by their in house luthier -- but they where setup out-of-the-box and ready to play (that shocked the **it out of me). If you have ever played a Gibson or Fender from Korea out-of-the-box you will understand why (they suck). Now all three where amazing, but the one that made me giggle like a Korean school girl was the EX-SS.

This guitar is unlike any other guitar that is on the market today. It is almost like one of the new D’Angelico Masterbuilts ran off and had it's way with a Rickenbacker 360 -- then nine months later out came the EX-SS. Her thin body and almost dreadknot like square shoulder made her very easy to hold while playing sitting down or standing. Her frets were even and smooth to the touch -- I was able to fly up and down all 22 frets without any hesitation. Her acoustic sound was the typical volume of a thin semi-hollow with that nice snap you get from a traditional full hollow body's soundboard. Although she sounded nice acoustic -- this girl was built to be plugged in and when she was -- she could sing.

When playing a semi-hollow guitar I always have what I call my "home" position. This is where I rest my hand while not playing to balance the guitar's weight. With the EX-SS I did not need to keep my hand on her neck as a counter weight leaving my hands free while not playing. As a vocalist this is a huge plus for me. I love the sound of a semi-hollow body guitar but find them uncomfortable to play for the most part -- with this EX-SS I felt like I was playing a thin light weight solid body -- and she was just as enjoyable to play as she was to listen to. Over all this is an amazing guitar, and it is just ridiculous that her price tag is under $1,500 USD.

What I would change:
Not a damn thing.

My advice:
If you are a Ibanez Artcore, Epiphone dot, Gibson ES, Gretsch or Rickenbacker player you need to play a D'Angelico Guitar.

Buy this Guitar from the GTR Store  (buy it here)

Posted by Local Music Gear at 7:43 AM