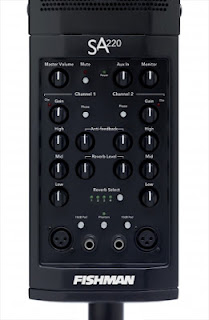 On the back panel:
The SA220 features an auxiliary stereo input with level control, four digital reverb effects with master level balanced XLR D.I. outputs for both channels and main mix with a monitor I/O and mute with remote footswitch input and tuner output.

This review was done over the course of two months and in different locations. Since I'm a little nuts and consider myself a guitarist that favors the acoustic side of things I wanted to really put this amp to the test. Living in the beautiful state of NJ I have access to many open mics and musicians. With that said I attended five local open mics, I plugged in at the New Brunswick train station (until the cops asked for my permit) and brought the amp to my booth at guitar con. There was a total of twenty two musicians that tried the SA220 using many different styles and types of guitars with different pickup systems. Now I could have just played away in my home or at a studio, but that's not what this was intended for. So this review isn't just my opinion, but is also twenty two of Jersey's finest open mic, pub, and street musician's.

There were a few others but the drinks at the open mics got the better of my memory. 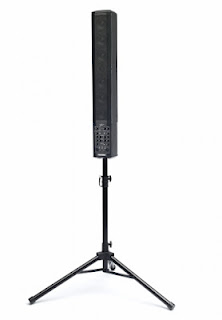 Reliability & Durability:
I personally like the Fishman line of products mainly for two reasons; sound and durability. This was set up and broken down at least fifty times over two months and dragged through the street of Hoboken NJ, New Brunswick NJ, Redbank NJ, and Brooklyn NY. It has been in the trunk of a number of cabs, the NY city subway system, and NJ transit trains (north east corridor). The case shows no sign of wear, the stand is in it tip-top shape and it has held up 100% of the time.

Ease of set up and break down:
It takes 5 minutes to set up. The base opens like an easel and you pop the amp on the top.

Impression:
I really enjoyed using this amp, but this review was not about me, it was about what other artists thought and what I heard for the audience. Now there is a small venue in NJ that is notorious for having really bad sound, the type of room that is a sound man's nightmare. The bar is just small and skinny with crap everywhere. Sound does not like this venue at all. The house set up was Fender Passport 500 watt and you could not hear a thing due to the squeal from the pick ups. I set the SA220 up in the far back corner and and notched out the sound bounce. There was a night and day difference in the sound. Now the SA220 is 220 watts but its has a ton of headroom and sounded louder and clearer than the Fender Passport 500 watt system. This was just one example of how the Fishman system made this open mic night a little more bearable. Since we all know that an open mic is karaoke with guitars 90% of the time, please note that if your a really bad guitarist or a really bad vocalist this will make your terrible sound even louder and clearer not better.

The Artist's Opinion:
There were a total of twenty two artists that used the SA220 instead of the house system or their amp for their entire set in a total of five open mics in five different venues. Every one of the artists enjoyed the system better than their current set up and their first question every time was "whats the price tag." After their set I asked everyone the same question; will this amp support your needs as a solo artist. Every last one said yes. Eighteen of them said they would like to see Fishman come out with an expansion board allowing them to have more inputs. I followed up by saying that it is meant for a solo artist not a band and eighteen said that the sound was better than what they are using for their full acoustic act's pa now.

My advice:
If you are a weekend  acoustic guitar player or a gigging musician the importance of having a quality amp that doubles as a pa system is like striking gold. Most people when picking out their acoustic guitar spends hours finding the one that just hits the ear the way they want, then they count on the sound guy and house PA system at a venue to make them sound good. This never happens so if you want to sound your best, I say buy it.