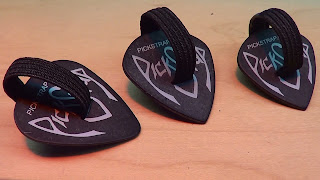 About:
Pickstrap Picks is the manufacturer of guitar picks that have a braided elastic band that is looped with a non-slip rubber strip through the pick to create a flexible fit that allows a guitarist to attach the pick to their finger while playing.

This review is on the GrippX in 1.14mm. gauge picks.

Impression:
When I received the picks in the mail I didn't really know what to make of them as they are very unique in design -- they are guitar picks with a seat-belt. Arron Marten (the creator of PickStrap Picks) sent me a very nice letter with the picks explaining his product in detail, but I didn't read it until after I tried the picks out. I figured that if I just bought a set in a store they wouldn't have instructions.

As a self proclaimed guitarist favoring the acoustic side of things, my first instinct was to use them as a set since there where three different sizes in the pack: regular/traditional, jumbo and jazz. I put the jumbo on my thumb, the standard on my middle finger and the jazz on my ring finger then played finger style. It took a few minutes to get used to, but unlike traditional finger guitar picks these have a flexible band that did not dig into my fingers while playing and allowed me to play for a longer period of time without any discomfort.

The second way I used this product was as a standard pick with the Jumbo strapped to my thumb. Again it took me a few minutes of play to get used to, but I found it made the transition from pick play to finger play seamless by rolling the pick over my thumb with my pointer finger while playing. Normally with a traditional pick I would either drop it on the floor or try to hold it in my knuckles while playing. By using the PickStrap pick I didn't miss a beat and my pick was still in my hand for when I needed to switch back to pick play.

Besides their over all functionality, they have a good sound to them. I would put them in the same category as a Dunlop Tortex in tone and character, but they truly outshine any finger pick I have ever played in comfort and tone.

My advice:
If you are a finger style guitarist or just need the pick strapped to you finger while playing -- this is the pick for you.