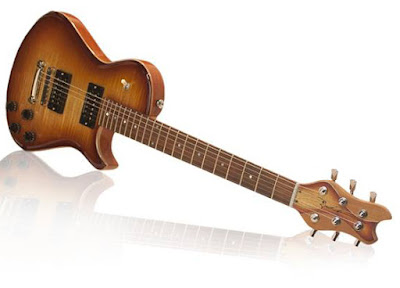 About:
Brubaker Musical Instruments is a manufacturer of handcrafted, American made, custom, boutique electric and bass guitars by master luthier Kevin Brubaker, in Rosedale, MD.

This KXG Standard has a genuine mahogany body with flame maple top that flows into a mahogany bolt-thru™ 22 fret 25 1/8" scale neck that is dressed in a rosewood 12" radius dance floor and is topped with a Graph Tech  Guitar Labs Tusq 1.700 nut.

Selector position 2: Neck and Bridge
A very usable controllable tone without the "middle quack" you typically get from a two humbucker equipped guitar, with an even balance between the neck and bridge when both volume pots are maxed.

This guitar also has a push/pull pot that shuts off one of the neck humbuckers coils yielding a single coil-ish tone.

Action, Fit & Finish:
The finish is a beautiful traditional "Cherry Burst".  The action was low without any fret buzz and the intonation was dead on.

Reliability & Durability:
The guitar seems to be well made. It is solid through and through. There was no hum or crackles from the electronics and all knobs and hardware were installed snug and proper.

Impression:
This was the second time that I had the opportunity to play a Brubaker guitar, and just like the first time I didn't want to put it down. Brubaker is mostly know for their extremely high-end bass and electric guitars that are made from some of the worlds rarest and most coveted build materials, but this one was a new concept for them using what they refer to as "standard" build materials. I kinda laughed at that since everything on this guitar would be at the top end of most luthier's catalogs, but when you are buying one of the best, even there "working-musicians" model guitar is outrageous in every way. Now besides all the goodies such as the Seymour Duncan pickups, top of the line electronic components and state-of-the-art Graph Tech Guitar Labs hardware that exudes tone and is designed for maximum playability, this guitar has a few features that you just can not get anywhere else on this side of $3,500 USD. 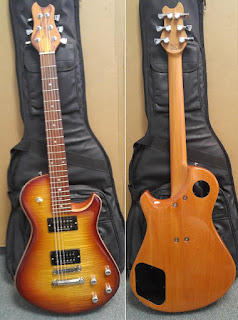 To start, this is the traditional modern players dream guitar. Yes, I used both traditional and modern together to describe one style of guitar ... because that is what it is. Most people refer to a vintage guitar as  "traditional", and that was the correct terminology in the 1970's - 1990's when luithers were just starting to push-the-envelope with new design concepts and getting the creative juices flowing, but it is just not the case any more. Hell, I grew up in the 90's and and the guitars I was playing at the time were called modern but are now lumped into the "traditional" category. To me there are traditional vintage, traditional modern and modern style guitars, and this guitar is a traditional guitar for the modern player. With that said, holy fu*k does this guitar play well.

I'm one of those guys that thinks that Leo Fender got everything right including the bolt-on neck. Now I'm sure some of you just stopped reading this, called me a nasty name and went back to your bedroom in the basement of your elderly mothers home -- but that's OK, not everyone can be successful in life. Moving on... so when I saw that Kevin Brubaker not only used a bolt-on neck in his design for this guitar but improved on it with his bolt-thru™ neck -- I was very excited to see what it was all about.

One thing I learned about guitar shopping early on is that you should always play the guitar unplugged sitting down before seeing what she can do through your favorite amp to insure a good fit. What I like to look for is balance, sustain, body resonance and tone. Much like a woman, you want your guitar to have a sweet voice that touches your soul and yes ... there is a thing as too much ass! When playing this guitar I was able to feel each note in my gut as I danced up and down her neck. Her acoustic voice was pleasant and warm with individual note clarity that I would compare to "piano-like"... and she is a sustain monster!! Not only was she musical, but her curves were in all the right places making her incredibly comfortable to play, and at just 8 lbs from a solid (not chambered) mahogany and maple guitar  -- she is a good weight for an all-nighter.

Over all this is hands down one of the best musical instruments I have ever played and I honestly loss sleep over her. From her unique body that has some influences from her Brubaker low-end cousins to her flat wide neck that reminds me of the modern style guitars from my childhood -- She was just amazing.

What I would change:
I would add a treble bleed circuit on the volume pot(s) to compensate for the high-end loss you receive with modern wiring during volume roll off and use the push/pull pot to run the neck humbucker in series-vs-parallel mode apposed to removing a coil to eliminate the loss of volume between the two modes and the pickup (60 cycle) hum when split.


My advice:
If you are a traditional modern player that is looking for something to add to your lineup without breaking the bank, this is a great option.