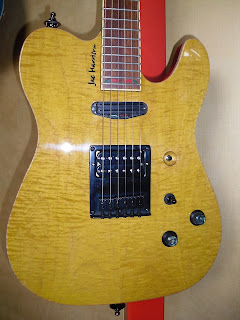 About:
Chili Custom Guitars is a manufacturer of handcrafted, custom boutique electric guitars by master luither Horst Weinelt, in Austria.

This Jac Harrison signature ChiliCaster model has an alder body with a big leaf maple cap that is dressed in a natural binding that flows into fat 59” profile 25 1/2" scale bolt-on satin walnut neck that is dressed in a 24 fret 14" radius bloodwood fingerboard featuring chili pepper inlays at the 12th and 24th fret wrapped in a cream binding and topped with a bone nut. 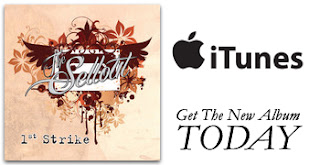 Selector position 1: Just Neck Series
A modern LP style neck humbucker meets a PRS 408 neck. A full warm round tone that has bell like qualities on the high end with individual note clarity and never ending sustain. Great for any style of play and can be used for thick leads.

Push/Push pot engaged: Just Neck Parallel
A thin humbucker or fat P-90 (depending on the amp used). Has that thin single coil sound without the hum. A very usable neck pickup for all genres and style of play.

Selector position 2: Neck Series and Bridge Series
A full even mix of the neck and bridge with a slight "59 LP middle quack that can be rolled off with the neck volume on (8) and a mean growl from the bridge. Can be used for thick leads that need a little more bite.

Push/Push pot engaged: Neck Parallel and Bridge Series
A dialed back bridge with a mid scoop. Excellent for 70's - 80's rock and 90's alternative with distortion or smooth Jazz without.

Selector position 3:  Just Bridge Series
Very aggressive and bold insane hard rock lead or a very bright clean bridge. The warmth of a vintage PAF with the volume and the clarity of a modern active without the harsh metallic active sound.

*By using the volume pot for each pickup with the treble bleed circuit, I was able to dial in many different tones from aggressive to calm and back again in each selector position.

Action, Fit & Finish:
The finish is a beautiful translucent high gloss hand rubbed "Vintage American Yellow" with a satin walnut on alder neck and back -- a true vintage meets modern look. The action was low without any fret buzz and the intonation was dead on.

Reliability & Durability:
The guitar seems to be well made. It is solid through and through. There was no hum or crackles from the electronics and all knobs and hardware were installed snug and proper.

Impression:
It’s not every day that a guy gets the chance to have his own signature guitar built -- so this review will be slightly different than others I have done before. I will say right off the bat that this guitar is 100% perfect in every way for me, but even though she was tailor made for me as an artist – she was also built with the consumer in mind. This is the fourth Chili Custom Guitar I have played and the second I now own. Chili Custom Guitars are my personal choice of guitars as an artist for a reason -- they are amazing. With that said they are very expensive to own with the average cost per guitar being about the same price as a pre-owned car. When Horst Weinelt (head luthier in charge at Chili Custom Guitars) and I started talking about this build, I asked him to work with me on the build materials to bring the cost down to around $1,800 - $2,000 USD (depending on the current exchange rate) so that my friends and readers could experience his craftsmanship within a moderate price range. After a few months of talking design we came up with what I believe is a guitar that destroys any American made Fender, Gibson or PRS by offering the versatility of all three guitars at the same time, with some extra features. We also used the same woods that are available at Fender, Gibson and PRS on their highest caliber of instrument that is accessible to the average working/hobbyist guitarist.

The reason why I chose to model my guitar after a combination of a Fender, Gibson and PRS -- is because up until five years ago they were what I used to set the standard when shopping for a guitar. I believe that each one of these manufacturers at one time had offered the best example of a particular style of guitar. I do not think this now do to their lack of "giving-a-shit", but I still wanted to use them as a reference point based of their vintage guitars. So... when I was dreaming up this guitar, I wanted it to combined the best elements of these there companies from their "hay day" and this is what Horst and I came up with.

We then wired her 1950's style (pickup hot to left lug -- center lug to toggle -- right lug grounded) but with a modern twist of just (2) volume pots -- (1) being a push/push for the neck pickup (parallel/series mode) with a treble bleed circuit of (100k ohm resistor/0.01 uf capacitor left lug to center lug) on each pot with the center lug of the 3-way to the momentary kill switch to the 1/4 inch jack. Now the best part about having a Chili apposed to any Fender, Gibson or PRS beside the Chili tone, is the intonation system. Horst Weinelt has his own way of making the guitar work, and without giving away his secrets -- the guitar is in perfect intonation on every fret all day long.

If you were to call the Fender, Gibson or PRS custom shop (as I did) and ask for them to build you this guitar they would say sure -- $4,975 at Fender, $5,720 at Gibson and $6,245 at PRS. Keep in mind that you would not get the Tele body anywhere but fender and you would not get the Chili intonation system or the hands of master luthier Horts Weinelt at all, but a cnc machine and a paint booth.

So to sum up this guitar, she is heaven. If you are on a budget but want an amazing guitar that will give you the versatility of having the combined tonal characteristics and playability of a Fender Tele, Fender Start, PRS Custom 24, PRS 408, Gibson LP and Gibson Nighthalk all in one sexy guitar -- you need to buy a Jac Harrison Signature ChiliCaster by Chili Custom Guitars.

There will only be a limited run at this price point -- to date there is a six week wait after deposit.

What I would change:
Nothing -- It is my design.

My advice:
My advice about Chili Custom Guitars is that you should play one and if you are collector you should own one. 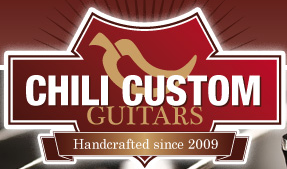