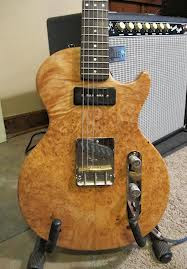 Purchased from: Manufacturer
Street Price: $1,999.00 USD including case + US shipping

The “Delta” series guitars are a brand new style for MacPherson, who hand crafts each guitar to his customers’ specs. The Delta is designed to combine the playability and sound of a thin-bodied Les Paul with the bluesy twang of a classic Telecaster. The single-cutaway Delta has a Honduras Mahogany body capped with Birdseye Maple. The five-piece laminated neck is bolt-on with a Birdseye maple headplate, rosewood fingerboard, string-through body American Standard Tele bridge and a bone nut.

Extras: Mother of Pearl dot fret markers (though MacPherson will do most any inlay a customer requests).        MacPherson also beveled the lower back corner of the body (and the back screw plate) where it joins the neck to enable greater comfort for guitarists playing on the upper registers.

Selector position one: Just Bridge
Clean, bright tone great for blues, rock and leads that cut through the rhythm.

Selector position two: Bridge and Neck
Bright, but with a mellower character than the bridge alone. Very Albert Collins

Selector position three: Just Neck
Very much like a Les Paul or a Gibson 335. Clean and warm, but overdrives nicely when desired.

Action, Fit & Finish:
The action on this was low, lean and clean, with no buzz. Tuners were tight, clear finish showed the beauty of the Birdseye maple top becoming quilted maple as it approached the neck. Visually, the guitar was flawless.

Reliability & Durability:
All parts were solid, guitar was tightly constructed; knobs, tuners and cable jacks all worked well with no ground hum.

Impression:
This guitar was engineered to be guitarist-friendly, with few controls but a great deal of range at your disposal. The Zexcoil noiseless Telecaster pickup in the bridge is a new technology, with individual magnets for each string, totally eliminating hum. But that’s not all they have going for them; they also sound like the Tele pickups of yesteryear, pre-CBS. Combined with MacPherson’s P-90 style custom wound pickup, the two provide a kind of counterpoint to each other, allowing a musician to essentially switch guitars by flicking a switch and turning a knob.

The guitar is also extremely hand-friendly, with a nice c-shaped neck that, combined with the 21-fret, 25” scale of the fretboard, makes it quite easy to get around. While playing it, I was able to tell that it was a very good guitar for the blues, country and rock tunes I typically play—It wasn’t until Steve Brown, guitarist for Trixter, dropped in at MacPherson’s that I truly understood how great this guitar sounded (see video).

When Steve took over I was able to see how the shortened scale length (the Delta’s scale is about half an inch shorter than a Telecaster) allows rapid transitions between octaves for great shredding. True, Steve’s abilities helped but the sounds he coaxed from the Delta spoke volumes.

MacPherson has created a guitar that has a great feel; a slim profile guitar with a neck like a Les Paul and pickups that can be switched between LP and Tele. He took the best of both and combined it into one killer blues guitar. Through past experience I have learned to trust Dennis MacPherson’s guitar design and building capabilities. I was not let down this time; the Delta is a blues workhorse that is solidly built and shows the breeding of a thoroughbred.

What I would change:
Nothing. It’s a beautiful looking and sounding work of art.

My advice:
For players seeking the richness of a Les Paul with the bite of a Tele, here it is. The guitar is beautiful, sounds even better than it looks and plays like butter. If you are in the market for a high quality, relatively inexpensive custom guitar that’s hand made by a true artisan, try out one of the Black Pearl Delta guitars. Once you pick it up you will want to own it.